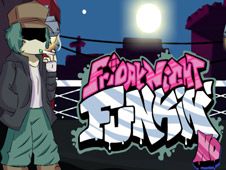 What is FNF Vs Garcello HD?

Garcello has constantly been one of the most popular characters to have appeared in our category of FNF Games online, in addition to his original mod having appeared many times before, and today he comes back with the Smoke 'Em Out Struggle Mod, but this time in High-Definition, meaning that everything looks, sounds, and feels better!

Defeat Garcello once more, in a remastered mod you HAVE to play!

As per usual, you can choose between the story mode and free play mode of the game, but you have to do the same thing in both, which is reaching the end of the songs by playing all of its notes according to the charts.

To do this, press arrow keys at the same time as arrow symbols match above BF's head, and remember that you have to get the timing right, or else you miss.

If you have too many misses in a row, you lose the whole game and have to start it again, so be careful not to let it happen, so that you prevail over the computer and its avatar, Garcello!