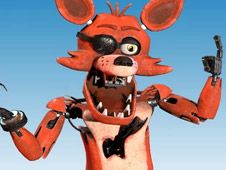 What is FNF vs Foxy (Real)?

A real version of Foxy from FNAF is now your newest antagonist here in the world of FNF Games, where we know for a fact you are always having a great time, especially when these two popular categories come together. Defeat this animatronic on the song called 'Foxiness', now revamped!

Watch as arrow symbols float and match above BF's head, and when they do, press the identical arrow keys to hit your notes, something you have to do until the song concludes to win, but know that if you miss doing so multiple times in a row, you mess up the chart and end up having to start again from scratch. Enjoy!