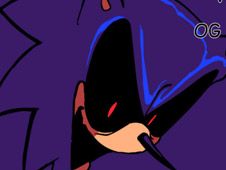 OG Sonic.EXE is now in FNF, with a mod that might be a joke or might be real, but we are sure that you will still have fun helping Boyfriend going up against him on the song called 'I am God'!

When the floating arrow symbols match above BF's head, press the identical arrow keys to hit your notes, and keep doing it until the song ends to win. If you miss notes multiple times in a row, you are going to lose, and be forced to start again from scratch, so don't let the health bar deplete, but make sure to win. Enjoy!