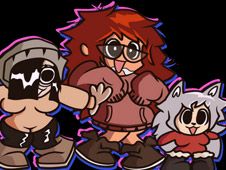 What is FNF vs NekoFreak (Remastered)?

Every time is a good time to play new Friday Night Funkin' Games online for free on our website, and we are going to prove that to you right now and here, as our team is delighted to share with everyone a great new game called FNF vs NekoFreak (Remastered), which is the updated version of the first game we've had here with this character, only now you get the whole week, featuring brand new songs, better animation, and lots more fun to have!

Help BF defeat his former dates in a rhythm battle!

Nekofreak and two other girls were the girls with whom BF went on dates right before the meeting and falling in love with GF, and now they've come back and want to ruin his actual relationship, which is why you have to defend it by defeating them in musical battles!

This game has three weeks, one for each character, and three songs for each week:

You will use the arrow keys to hit the notes of the songs at the right moment, so when you see that arrow symbols above BF match with one another, make sure to press the same arrow key.
Don't press them too fast or too slow, since that becomes a miss, and if you make too many misses in a row you are going to lose the game, and you can't want that to happen, right? Good luck, and enjoy!