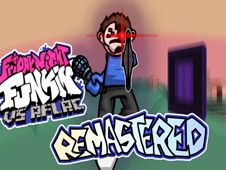 What is FNF Vs. Aflac Remastered?

Aflac is a Minecraft-inspired FNF character that now returns, as his original mod that was added quite a while ago has now been remastered, meaning that it looks better, it sounds better, and it is even more enjoyable, with it having the following custom tracks:

Let's have a BF Vs Aflac FNF battle, now remastered!

After making your choice between the story mode and free play mode, know that in either case, the way you win is the same, by reaching the end of the songs and playing all their notes according to the charts.

This means that as the song progresses, you watch for the moment when arrow symbols match above BF's head, and at the same time press the identical arrows.

Be careful not to miss doing that multiple times in a row, or you have to start again from scratch because you will have lost. Good luck, enjoy!