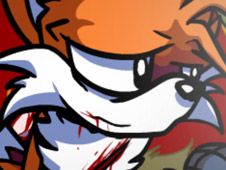 What is FNF vs Sonic.ERR Remastered?

FNF vs Sonic.ERR Remastered is a new mod where Tails is going to be your main opponent, but not the regular friendly character you know, but an evil variant of it, and you are invited to defeat him on the following two tracks:

After you make a choice between the story mode and free play mode, in either case, give your best to reach the end of the songs by playing their notes according to the charts, doing so by pressing arrow keys at the same time as the identical arrow symbols match above BF.

If you miss doing it too many times in a row, you end up losing and having to start again from scratch. Good luck, enjoy, and all the best we wish you all!