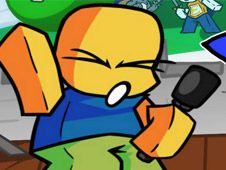 What is FNF vs Roblox Noob Remastered?

The Roblox Noob has been one of the most popular FNF mod characters that have appeared here so far, and that is not at all surprising considering that Roblox is one of the most popular gaming platforms in the entire world, and you now get the amazing chance of playing the game called FNF vs Roblox Noob Remastered, which is a remastered version of the original one, currently just in its demo stages, but when it will be complete, it will look and feel even better than the first one!

Defeat Roblox Noob once more, this time with even better animation and graphics!

The game is playable in both the Free Play mode and the Story Mode, so it is totally up to you which one you are going to pick, with your goal in both of them being to play the notes of the songs so well and according to the charts, and do it until the song ends.

This is done using the arrow keys, keys that you have to press at the same time as arrow symbols above BF match with one another, but be careful not to miss the timing, because if you miss it too much, you lose. Enjoy!