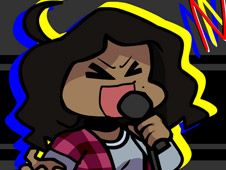 What is FNF: vs Sunday Remastered HD?

Sunday, a cool guitarist girl with lots of talent has been a popular character in the FNF Games world from the start, and since her debut, she has appeared in many other mods, but, right now, her original has been remastered in HD, meaning that everything looks and sounds better, and we are sure that you will enjoy this makeover even if you did not play the original. The songs you duel here are the following:

Whether you play this game in the story mode or pick a song you want from the free play mode, do the same, which is press the arrow keys at the same time as the same arrow symbols match above BF's head, and if you can do it correctly until the end of the song, you are going to win.

Of course, that also means that if you miss pressing the keys too many times in a row, you are going to lose and have to start again, something we hope does not happen, but instead beat Sunday at music, and enjoy this time a lot!