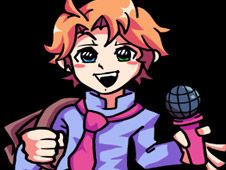 What is FnF Week 6 HD Remastered?

Not only is FnF Week 6 HD Remastered the first HD remastering of the Week 6 of FNF, where you get the awesome chance to fight off against Senpai in a music battle, but to make things even more interesting and fun, there are even two new songs added to the fun, for a total of five:

Defeat Senpai in a rhythm battle once more, this time in HD!

Whether you try to tackle this character in the story mode or the free play mode, it's up to you, and in either of them what you have to do is reach the end of the songs, play all the notes in the charts, and win!

To do this, when arrow symbols above BF match one another, you need to press the arrow keys on your keyboard, and you need to keep doing it until the end of the song.

Be careful not to miss pressing the keys too many times in a row, since that happening means you lose and have to start again. Enjoy!