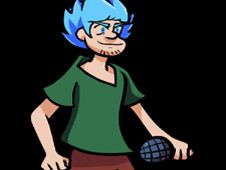 What is FNF vs Shaggy Remastered?

We're not at all surprised that the previous FNF mod with Shaggy had been received very well on our website since Scooby-Doo is one of the most popular series and franchises in the entire world, and Shaggy is a fan-favorite character, one that now returns with the remastered version of his original game, bringing new music, new charts, new sprites, and fresh fun!

As you can see in the game's image, Shaggy has spiky blue hair, and the reason for that is because he's entered Super Sayan Mode, just like Dragonball Z characters, so he is hyper-focused and ready to take you down on the following songs:

Help Boyriend defeat the Super-Sayan Shaggy in a rhythm battle for the ages!

When you see the arrow icons above BF matching with the same ones floating around him, that is your queue to press the very same arrow key on your keyboard, which means that you've played the notes of the songs at their right time, and if you keep it until the end of the game and turn the progress bar in your favor, you win.

It's not complicated at all, but if you miss pressing too many of the keys in a row, you lose the game and have to start again, so be careful not to let that happen. Good luck, and enjoy!