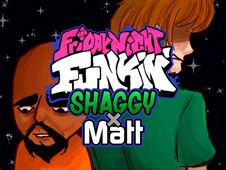 Battles between Shaggy and Matt from Wii Sports have already become iconic in the world of FNF Games, which is why we are excited for this pairing to have returned to our website right now and here when they are going to be playable in the game called FNF’ Shaggy x Matt Sad Version, where the two are apart, but still dueting on the song called The Last Tree!

Make the sadness disappear with Shaggy and Matt!

As the song proceeds, be careful for when it is your turn to sing, which is when you see arrow symbols above your character matching one another, and at that moment, you will have to press the same arrow keys, something that needs to happen until the end of the song if you want to win.

Be careful about your timing, because if you miss pressing too many keys one after another, you will lose and have to start again, something we definitely don't wish for you. Good luck!