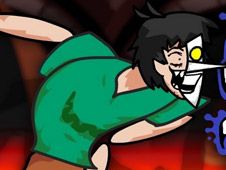 Shaggy has become a fan-favorite of the FNF community right after his debut, and oftentimes we have new games with him, just like today, when we invite you all to have tons of fun with FNF: Shaggy sings [BIG SHOT], where this is a brand new song for you and him to sing together and complete, so are you up to it?

Show Shaggy who is a real musical big shot!

Hit the play button to start, as there is only one song in this game, and help BF take it to the end by singing all his notes when his turn comes. How? You watch for when arrow symbols above BF match one another, and at the same time press the same arrow keys from the keyboard.

Be careful about missing notes, because if you miss to hit them too many times in a row, that leads to you losing and having to start the game all over again from scratch. Good luck, enjoy!