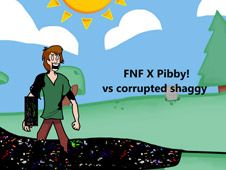 What is FNF vs Pibby Shaggy?

FNF Pibby Games online grow in numbers by the day, and we don't want to miss out on bringing over for you any of them, which is the reason why right at this moment our team is delighted to share with you the game known as FNF vs Pibby Shaggy, where the corrupted destroyer of worlds needs to be defeated on the song known as “Mystery”!

Take on Pibby Shaggy, and defeat him, just like you always do with this Scooby-Doo character!

After hitting the play button, make sure to hit all the notes of the song at their right time in the charts, something you have to keep doing until the song ends to become the winner.

To do so, watch for the moment when arrow symbols float and match above BF's head, and at the exact same time, press the identical arrow keys.

Be careful not to miss doing it too many times in a row, because if that happens, you end up losing. Good luck, and don't hesitate to share this game with your friends right now, they won't regret it, you can bet!