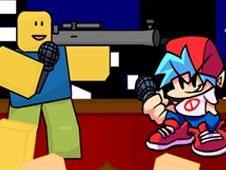 What is Friday Night Bloxxin’ vs Roblox Noob?

It was only a matter of time before there was a crossover between FNF Games and Roblox Games, since these are two of the most popular video games of the moment, so fans of both will be very happy to see that our latest rhythm game online for free is called Friday Night Bloxxin’ vs Roblox Noob, and you will play the role of Boyfriend, who has to defeat the Roblox Noob character to escape out of ROBLOX and be back with Girlfriend.

To achieve this goal, you have to beat the noob on three of his custom songs:

FNF VS ROBLOX: a Friday Night Funk battle to remember!

When you see the arrow symbols matching above BF's head, it is at that moment that you have to press the same arrows on your keyboard, so that you hit all the notes of the songs at the right time and turn the progress bar in your favor, and if it stays like that by the end of the songs, you win.

Choose between the story mode and free play mode, pick a level of difficulty, and then start having fun on our website like only we can offer you the chance to have fun!