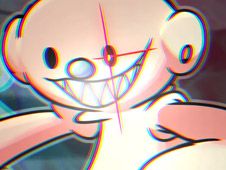 What is FNF vs Roblox Bear?

You can create almost anything you can imagine in the world of Roblox, even bears, but the one you are facing today is quite a scary one, a horror bear that wants to tear you up with music and sounds, so defeat him right now on all these original tracks:

In the game's main menu you will make a choice between the story mode and free play mode, after which you will give it your best to reach the end of the songs by playing all their notes according to the charts.

To do this, you watch for when the arrow symbols above BF match one another and press the identical arrow keys at the same time. Don't miss doing that multiple times in a row, or you have to start again from scratch. Good luck!