FNF vs Scary Larry from Roblox 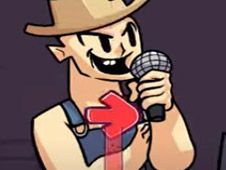 We've had FNF mods with Roblox added on our website before, but now we want to offer you something a bit different, because instead of going up against Roblox characters, you go up against famous YouTubers who are known for playing this video game in their stream and videos all the time, and if you are big in this community, you already know and love them, no doubt!

Boyfriend Vs YouTubers, a never-ending battle!

This game is a skin pack, meaning that the regular antagonists have been replaced with new characters, in this case, Youtubers from Roblox, so the six original weeks remain, including their songs. Access the songs in either the story mode or the free play mode.

When you see arrow symbols above BF match with one another, at that time you also have to press the same arrow keys and keep doing it until the end of the songs to become the winner.

Be careful not to miss pressing the keys too many times in a row, because if that happens, you lose and have to start again from the beginning of the song. Good luck we wish you all, and a great time, as always!