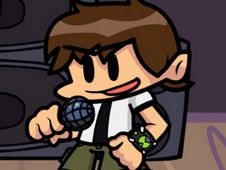 We really hope that you are as excited as we are that right now on our website we can offer you all a brand new FNF Game online such as FNF vs Ben 10 Skin Mod, because Ben 10 is one of our favorite cartoons, and we're sure the same is true for most of the visitors here, so the addition of FNF vs Ben 10 Skin Mod was one of the best ideas we could have had today!

This game brings forward the original songs all the way up to week four, only instead of the regular antagonists, you have humans and aliens from the Ben 10 show on Cartoon Network!

Help Ben defeat his rivals in music, not with aliens, but with rhythm!

Against these characters you can go up in either the story mode or the free play mode, it's up to you, with the goal being the same, which is to reach the end of the songs by following their charts, and when you see the progress bar tilted towards you, you've won!

Play the notes of the songs using the arrow keys, keys that you have to press at the same time as the arrow symbols above BF match with one another, but don't press them too early or too late, because too many of these mistakes in a row cause you to lose.

Good luck, and we definitely hope to see you around some more, since the fun provided by this category never stops!