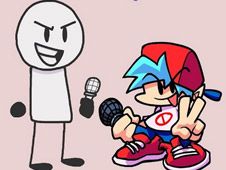 What is Friday Night Funkin Vs Sketchy?

We know that kids who come to our website to play games never get tired of new Friday Night Funkin' mods online that we share with them, which is the reason why right now we brought over a brand new one for them to enjoy, the awesome new game called Friday Night Funkin Vs Sketchy.

Who is Sketchy from this FNF mod online?

Sketchy, just like his name would suggest, is a man that looks like a doodle on a piece of paper, all in black and white, having a round head, a square torso, and legs and hands made out of sticks, with him holding a mic in one of his hand.

Because Boyfriend unexpectedly showed up in the drawing of Sketchy, the two now have to battle in music, and you will help our protagonist by pressing the arrow keys at the right time to play the song and win the fight!

Like with all the other version, this new character has his custom songs as well, and they are the following