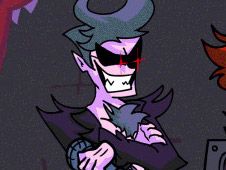 What is Friday Night Funkin ReFunked?

Friday Night Funkin ReFunked is the first version of a mod that aims to remake the original Friday Night Funkin' game with new graphics and remixed songs, and so far we've got the first week for you, where Boyfriend and Daddy Dearest go out it, and you will do it on the following songs:

It's time for the first FNF ReFunked battle!

Whether you face off GF's dad in the story mode or free play mode, the only way you have to win is by playing all your notes according to the charts and reaching the end of the songs. So, when arrow symbols float and match above BF, press the identical arrow keys at the same time.

Know that if you miss hitting those notes too many times in a row, you lose and have to start again from scratch, so focus not to let it happen. Good luck, enjoy, and stick around to catch the following weeks that are yet to come!