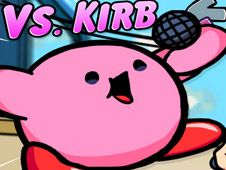 What is Friday Night Funkin Vs Kirb?

Kirb is a pink yellow inspired by Kirby Super Star as well as Boyfriend, being a mixture of these two characters, and you will sing one song with it, and four others against four antagonists from the original game, making this quite the unique mod to have been added on our website, so we hope you won't miss out on it for anything in the world. These are the songs:

Have fun singing and dancing with Kirb!

When you see arrow symbols matching above the head of your character, that is when you have to press the same arrow keys, and if you keep doing it correctly until the end of the song, you are going to win.

Be careful not to miss pressing the keys too many times in a row, since that leads to you losing and having to start again from scratch, something we definitely don't wish for you. Good luck!