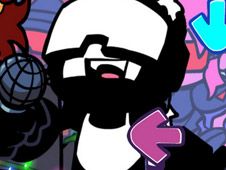 Tankman is the latest antagonist featured in the FNF Games category and the original game, him being the antagonist of Week 7, but today we will see him in a new light, as he has become the protagonist of Week 6, where you have to help Boyfriend defeat Senpai on his three songs (Senpai, Roses, Thorns), and, even better there are custom vocals for Tankman, so there's plenty of fun things for you in this new mod!

Tankman Vs Senpai, a rhythm battle like no other before!

Do your best to reach the end of the songs so that the progress bar turns towards you to win. When the arrow symbols above Tankman's head are matched, you will press the same arrow key.

Be careful not to press the keys too early or too late, or press the wrong keys, since too many of these mistakes one after another means losing and having to start again!