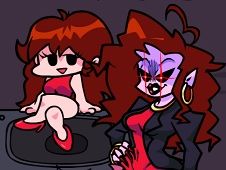 What is FNF: Playable Mom with Vocals?

Playable Mom with Vocals is a new Friday Night Funkin' mod in which you will have to help Mom, respectively Girlfriend's mother. In the game you will have 22 songs that you will have to dance with this character. The songs are not new, but they are entirely vocalized.

Who is Mommy Mearest from FNF?

This character is a female one, as a role, she is Girlfriend's mother, and in the FNF game you will meet her on several levels. This time he is the main character in the game, but normally she represents only one level in an ordinary way. The physical appearance of this character is quite extravagant, because her clothing and hairstyle are quite eccentric, with large, wavy, reddish hair, eyes are red, with a laser-like light in the eyes, earrings are large, round , and her clothing is quite brief, with a short red suit on a, and a black jacket over the suit. He is wearing a pair of black boots that reach to his knees.

use the arrows to dance.