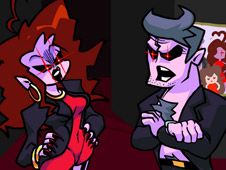 What is FNF: Mom vs Dad Divorcin Court?

Well, it seems that there are problems in paradise or musical hell? Either way, Daddy Dearest, and Mummy Must Murder can't get along anymore and are getting in divorce, and according to tradition in the universe of Friday Night Funkin Games, they will settle it through a rap battle against each other, with the winner taking custody of Girlfriend. Who will win? Well, you, if you play this game right now!

Daddy Dearest Vs Mummy Must Murder: a rhythm battle like none other!

You are going to play on the side of Daddy Dearest in this game, and the three songs that the two of you battle it out are:

When arrow symbols match above your character's head, press the same arrows on your keyboard at the same time, and you should be careful not to miss hitting too many notes of the songs in a row, since that shoes you've got no rhythm, you screw up the song, and you lose.

This is a mod like no other, so playing it right now should be your priority, and something we see you doing right away!