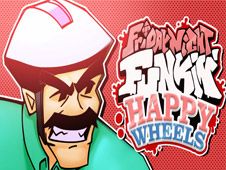 What is FNF vs Irresponsible Dad (Happy Wheels)?

Without a doubt, one of the most popular internet games that many people know is that of Happy Wheels, where you get a man going on a bike or other vehicle with wheels and you try not to get hurt by the various traps coming his way, otherwise he gets into gruesome accidents. Well, luckily for him, he now only has to face you in a rap battle, where you try to help Boyfriend defeat him on the following custom songs:

Get the bloody rap battle started!

Whether you choose to face this character in the story mode or free play mode, that choice is yours, but no matter, your goal is the same, which is playing all the notes of the songs at their right time in the charts, so that when you reach the end of the song, you become the winner.

To play notes, press arrow keys at the same time as arrow symbols above BF match one another, but remember that if you miss to press them too many times in a row, you lose and have to start again, something we don't wish for, you, as we only want your best, and to see you win!