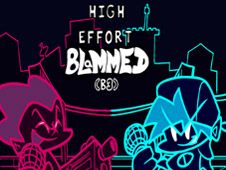 What is FNF High Effort B3 Blammed?

Right now we're offering you up a special kind of new FNF mod online, as right now we are delighted to share with everyone here the awesome new game called FNF High Effort B3 Blammed, which features a remix by B3, one of the most popular FNF remixers out there, and it is only of the track called Blammed, an original song from High Effort that people love a lot.

You will love the shape-shifting and interdimensional happenings that will occur in this game also, so be on the lookout for any surprises! Until then, let us teach you what to do, so you can start having fun with the game right away!

Boyfriend needs your help to defeat the antagonist, and you will use the arrow keys for that, pressing them when the same arrow symbol match above his head. That is how you hit the notes of the songs, and if you reach the end of the songs and turn the progress bar green, you have won.

You lose in case you miss hitting too many notes in a row, so be careful and have good timing so that does not happen! Good luck to you all, and we hope to see you around some more, cause fun is still on its way!