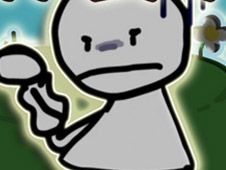 What is FNF vs Bob High Effort?

Bob is one of the most popular characters encountered so far in the world of Friday Night Funkin' Games since he is quite the pesky stickman figure, and quite the dangerous opponent, and he is only becoming more dangerous and hard to defeat right now when you get to play against him in FNF vs Bob High Effort!

Give all your effort to defeat FNF's Bob, right now!

The classic songs of this mod are back, only at a higher difficulty, and they are:

When you see the arrow symbols above BF's head being matched with those flying around him, that is the moment when you also have to press the very same key on the keyboard, so that you play the notes of the songs according to their charts.

If you do that until the end of the song and the progress bar is in your favor, you've won. You lose if the bar goes the other way, which happens when you have missed too many notes one after another. It's simple, so start the fun!