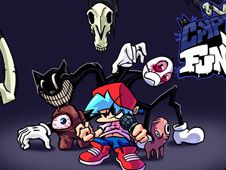 Cartoon Cat, Lil’ Nugget, and many more Trevor Henderson characters are going to feature as antagonists in the new FNF Cryptid Night Funkin mod, which is just in its demo stages, but even in this V1 edition we still have plenty of amazing songs to share with you in it:

Let's have fun with the new Cryptid Night Funkin mod!

After making a choice between the two modes, story and free play, give your best to play the notes of the songs according to their charts until you reach their end, which is when you win. Do that by pressing arrow keys at the same time as the identical symbols match above BF's head.

Make sure not to miss notes by pressing wrong keys, getting the timing wrong, or not pressing keys at all, because it will lead to you losing, which happens when your health bar gets completely depleted. Good luck, enjoy!