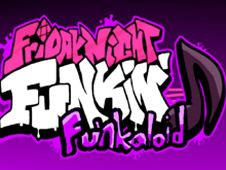 As you can clearly see right now, we're not stopping from bringing you new and exciting FNF Games online on our website today, and right at this moment we have shared with you the game called Friday Night Funkin' UTAU mod, also known as Friday Night Funkin' Funkaloid, and we're sure the game is going to be a real hit!

In these songs, you have to give your best to help Boyfriend defeat their antagonists so that he can finally date Girlfriend!

How to defeat the Funkaloid antagonists:

Press the arrow keys on your keyboard when the arrow symbols on the screen are matching, and if you always time it right and you hit the notes of the songs correctly, you will have won the battle, which happens when the progress bar is green. You lose instead if you make too many mistakes and the bar turns red, so be careful of that.

Good luck to everyone trying their hand at this game, and we hope you don't stop here, since it would be a shame not to play even more of our new games of the day!