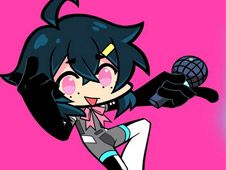 Already from her name, you have probably realized that Kou has an anime design, with her hair being dark just like the depths of the ocean, she wears a full-body suit in the color grey, black leggings, and gloves. Just like many other anime hairstyles, her hair has a tiny strand sticking up over her head.

Kou is a boy who is passionate about stars and everything else about astrology, which is the reason why Boyfriend and Girlfriend met her in an observatory, where they were trying to hide away and get some privacy from GF's parents. That is when Kou challenged BF to a music battle, and you will have this battle over the songs called Space Boy, Cosmic, and K.O.U.

Boyfriend Vs Kou: A Rhythm Battle

For those of you who've not played games in this series before, make sure to read this fully to understand how you can help BF defeat Kou in a battle of rhythm and music!

You will press the arrow keys when their symbols from the screen are matching so that you can hit all the notes of the song properly, and doing that until the progress bar turns fully green gives you the win.

Be careful not to make too many mistakes, because if you do, the bar turns red because your opponent is winning, and if it gets fully red, you lose. Good luck!