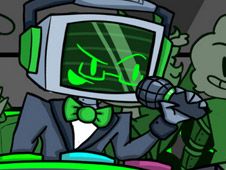 You can always bet on having fun by playing new FNF Games with robots online, which is the reason why right at this moment our administrative team invites everyone to have fun with the game called Friday Night Funkin NDXL Mod, where NDXL is a robot that has a monitor as his head, and he is a DJ that brings to the table lots of awesome and new original custom songs:

Boyfriend Vs The Robot DJ!

When you see the arrow symbols floating around BF match with those above his head, it is at that moment that you have to press the same arrow keys on your keyboard to play and hit the notes of the songs at their right time, and you win by reaching the end of the songs and turning the bar in your favor, simple as that.

Be careful not to press the keys at the wrong times, because once it might be fine, but if you make this mistake too much, you lose the game and have to start it all over again, and we don't wish you that, but we wish you only the best, and victory!