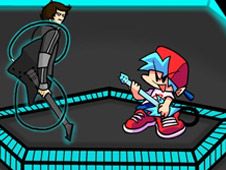 What is Friday Night Funkin vs Nix Guitar Mod?

The FNF Games with guitars that we've had here so far had been received very well, and while in many of them Boyfriend was playing solo, this time he has a rival in the mastering of a guitar, so you are about to have a guitar-off against Nix, who is quite the rockstar himself, and this new awesome game is aptly named Friday Night Funkin vs Nix Guitar Mod. Trust us, this is better than playing Guitar Hero!

Learn how to defeat Nix from FNF, right here!

Of course, despite playing the guitar instead of rapping or singing songs, the gameplay remains the same, so you will still use the arrow keys. When they match above Boyfriend's head, press the same arrow key at the same time to hit the note, but know that missing too many chords in a row means losing the game, so don't let it happen!

The songs featured in this game are called Tread, Discharge, and Oblivion. Nix has long hair, he has an aura of light around his body, and his guitar is a huge one that is connected by two strings, and he's one of the coolest antagonists featured in this series so far, without a doubt, but we still wish you good luck at beating him!