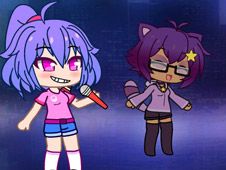 The combination of Friday Night Funkin Games with the world of anime and everything surrounding it has always been a hit so far, which is why our team is delighted that right now we could share with you the game called Friday Night Funkin Gacha Mod, and for those of you who don't know, virtual gacha games are really trendy right now, where people play slot-like games to get virtual png's of various cute girls in anime, or original characters for the game.

The character that Boyfriend is going up against is the Default Female avatar of Gacha Club, one of the most popular gacha games in the world, her being an anime girl with blue hair and pink eyes, who wears blue shorts, a pink top, and has white ankle socks. Girlfriend is also replaced with Bex, a cat-girl with glasses who has a tail and a cute star accessory on her hair. Gacha Life is the main custom song in this game.

This is a rhythm game, so you have to hit the notes to the song at the right moment in order for Boyfriend to win, so hit the arrow keys on your keyboard when the same arrow symbols from the screen match, and don't do it too soon or too late, because that counts as a miss, and too many misses in a row mean losing the battle.

Good luck, have fun, and don't stop here, since there are plenty more of these new games coming today here for you!

Use the arrow keys to hit the notes.