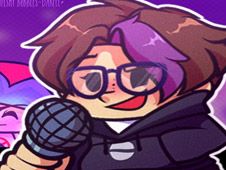 What is Friday Night Funkin’ With Shyrell MOD?

There are more and more modders out there who create their own character and insert themselves in the FNF Games you play on our website, and one of the coolest ones you can check out right now is the Friday Night Funkin’ With Shyrell MOD, where this modder and her team has put in a lot of work to offer you this fresh new experience about which we tell you more right now and here!

She is a girl who is quite the tomboy, and even some characters like Pico or Senpai thought that she was a man at first sight. She has white shoes, a black jacket, wears glasses, and in her brown hair, there is a strand of purple hair too.

She replaces Boyfriend as the protagonist, while he is sitting on the speakers with Girlfriend, and you have to help Shyrell defeat the classic antagonists in musical battles.

How to play the Shyrell Mod online

Despite the character change, what you have to do remains the same, which is to use the arrow keys and press them at the right time so you hit all the notes of the song and win the battle, and make sure not to miss too many notes, because then your opponent will win the singing battle or rap battle you are taking part in. Good luck!