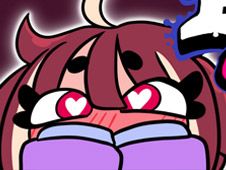 What is Friday Night Funkin vs QT Mod?

QT is a girl whose name already tells you what she is, which is really cute, and we love it that she is the newest antagonist in our series of FNF Games, even more so with this awesome game called Friday Night Funkin vs QT Mod, one of the best we have seen in terms of animation, sprites, backgrounds, and music in quite a while, so it is highly recommended! It is a full week game that includes no less than five games:

For each song, no matter if you play in the Story Mode or the Free Play mode, your goal is to play all the notes of the songs at their right time in the charts, using the arrow keys to play the notes. If you reach the end of the songs doing that and the progress bar is in your favor, you have won, simple as that.

So, when you see arrow symbols match above BF's head, pres the same arrow keys on your keyboard, but know that getting the timing wrong for that too many times in a row, you lose the whole game and have to start again. Enjoy, and make sure to stick around for more fun to come, since it's far from over!