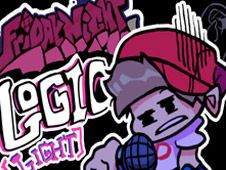 Friday Night Funkin Logic was an animation based on the FNF Games series, and now it has its own game based upon the animation, where Boyfriend and the gang all look a bit different, and you are facing off against multiple new antagonists, and you have lots of awesome new songs to do it on as well:

Are you skilled enough to beat the FNF Logic mod?

Well, if you are, then tackle these songs in either the story mode or the free play mode, giving it your very best to reach their end and turn the progress bar in your favor to achieve victory.

This means that when you see arrow symbols above BF match with one another, you have to press the same arrow keys on your keyboard, and if you do it at the correct moment, you play the song according to its chart.

Be careful not to miss too many of the notes one after another, because if that happens you lose and have to start again from scratch. Good luck we wish you all, and all the best, as always!