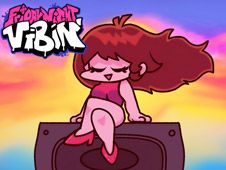 Get vibing right now with one of the best new FNF modded games online on our website, games we want to bring you as much of as possible since we've seen how much you enjoy them, so what are the chances you won't love this one too? Friday Night Vibin’ UTAU Cover is the name of the game, and previous UTAU games have been very well received, so we're positive it will also apply to this new update!

The main things that this new mod brings are new designs, awesome new colors, as well as new versions of the songs, as weeks 4, 5, and 6 have brand new visuals for you to enjoy, as well as new song covers of the original made by these awesome artists.

You will face off against various antagonists such as Daddy Dearest, Mummy Mearest, Pico, Senpai, and others, doing it in musical battles where you have to show great rhythm, because only then will Boyfriend and Girlfriend finally be together!

To do so, press the arrow keys on your keyboard at the moment that the arrow keys on the screen match with one another, but if you don't do it in time and miss too many times, you will lose the game and your opponent wins.

We hope that does not happen, so we wish you good luck, and invite you to play as many new FNF Games on our website, since it is the only way to get better at them!