FNF Time’s up (Vs. Liver Mario) 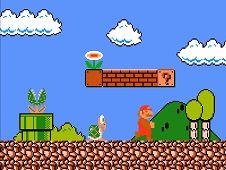 What is Super Mario Bros?

It is time to go back to the innocence of our youths when we had nothing to worry about except the games we played. While it is difficult to find the old retro classic, Super Mario Bros, on its old physical cartridge, that does not mean you can never play it again. You can now relive your favorite Mario Games for free, including Super Mario Bros.

There is no change to gameplay from the original Super Mario Bros, but the controls are a bit different. Unless you know a way to plug in the original NES controller, then you must get used to the following controls:

Movement: Movement in Super Mario Bros are the arrow keys. Alternatively, if you feel more comfortable with the WASD keys, they can also be used to move Mario around.

Sprinting/Using Fire: Power-Ups are available by hitting question mark blocks. If you are lucky enough to score a flower, then you can power up Mario to use a fireball attack with the shift key. When you are not powered up, you can use the CTRL key to sprint.

Pausing or muting: Sometimes, life gets in the way, and you need to interrupt your gameplay. No worries, you can pause by pressing “P” on the keyboard. We also know that it is necessary to mute a game when there is a crying baby or when taking a phone call, so pressing “M” will mute the game.

Otherwise, Super Mario Bros plays exactly like the original game. Beat each level as fast as possible while avoiding costly mistakes. How can you avoid mistakes? Look at the following tips:

●    Do not ignore the question mark blocks. It is understandable to want to speed to the end of each level to get it over with, but there are important power-ups and coins. They may seem like they take too long to get, but they could save you in a pinch in the end.
●    You do not have to attack everything. As much as it is great to smash every Goomba on the stage, if you are trying to make time, then it is best to try to avoid battle as much as possible.
●    Do not forget about the pipes! We know you want to clear the level as fast as you can, but there is a lot to grab underground, too. Not all the pipes lead underground but pressing down on a pipe can send you down one that does lead there.
●    Try to at least hit a normal mushroom. When you are small, one hit will kill you, and you might mistime a jump and be at the wrong end of a Goomba. Having a normal mushroom power-up will save your life.

Get to the castle at the end and save the princess!