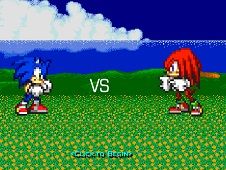 What is Super Smash Flash?

Not everyone has an older system to play the old Super Smash games, but that does not mean the good games have to stay in the past. Play-Games.com have brought the Super Smash games to the website with this collection of free fighting games, and this includes Super Smash Flash.

There are twelve playable characters in Super Smash Bros., eight of which are available from the start and four of which are unlockable. Super Smash Flash is similar with only a handful of players available. You can play as Pikachu, Megaman, Knuckles, Kirby, Fox, Captain Falcon, Sonic, Tails, Blade, Samus, Mario, Link, and Zelda. The rest of the characters are unlockable by playing the game.

To pause the game, any player would need to press the backspace key. You will be reminded of the controls before you start the game. Now, it is time to play the game. You can select from 1P MODE or VS MODE.

1P Mode has Regular Match, Stadium, and Training, while VS MODE has Melee Mode. If you want to unlock more characters, then you can play Regular Match in 1P Mode. This gives you Classic or Adventure Mode. Classic mode puts you against opponents in simultaneous succession. Adventure Mode has you battle through various stages. Playing the single-player game will help you unlock more characters. Here are some tips to get you through Super Smash Flash.

●    At the end of each match, you will see your points, remaining lives, and other stats. The biggest thing you want to do is rack up as many points as possible. Do not worry too much about not maxing out your points early in the game, especially if you are still learning.
●    Do not get too overconfident with the kills. If your opponent is already falling off the stage, do not chase them off to try to get the final kill. There is a chance you might miss and cost yourself a match.
●    Do not stress during the mini game where you break targets. You have plenty of time to clear the level, even if you make a couple of mistakes.

To choose your character, move the RED P1 DOT on which character you want to play with, and hit GO.

The controls for Super Smash Flash are: