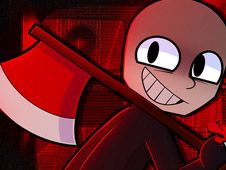 What is FNF: Mii Funkin Vs. eteled?

The newest rival of Boyfriend's in music is a Mii known as Eteled, a scary and mysterious character who you should be really careful about, one that you and BF will try to defeat on a total of five original custom songs:

If you want dialogues and a whole adventure through the world of music, try the Story Mode, but if you just want to experience the songs, and in what order you want to, then try out the Free Play mode.

When it is BF's turn in songs, use the arrow keys to play his notes, so when you see arrow symbols above BF being matched with one another, you have to press the same arrow keys.

Keep at it until the song ends, but be careful not to miss too many of the notes one after another, because if that happens, you lose and have to start the game again from scratch. Enjoy!