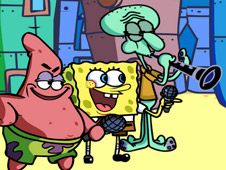 What is FNF: Bikini Bottom Funkin’?

We've had previous FNF mods with SpongeBob added on our website, and because those had been received very well, we are confident that the same will be true right now as well for the latest one we've brought you, a mod called FNF: Bikini Bottom Funkin’, where Spongebob, Patrick, and Squidward are all going to be antagonists, each one with their own songs, and you've got a total of six songs, one for each mode:

Join the Bikini Bottom Rhythm Battle, and win it!

Of course, you are playing on the side of Boyfriend, and you have to defeat these Nick characters by playing the notes of the songs accordingly and reaching their conclusion because if you do reach that point, you become the winner.

To play notes in these music games, press the arrow keys at the same time as arrow symbols above BF match one another, but don't miss doing it too many times in a row, because you are going to lose if that happens.

Good luck, enjoy this game as only here is possible, and have tons of fun, as always!