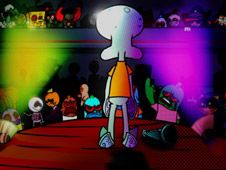 What is FNF Slaughtering Night At Bikini Bottom?

Slaughtering Night At Bikini Bottom is an FNF mod featuring the SpongeBob character you know and love very much, but the characters are quite creepy and scary, and we're sure that you will have a fun time going up against them, even more so on new four songs:

Whether you are playing in the story mode or free play mode, winning is achieved in the same way in both cases, by reaching the end of the songs, which is done by hitting notes according to the charts until that point.

To do it, when you see floating arrow symbols match on the top right, you need to press the identical arrow keys. If you miss too many times in a row, you will instead lose and have to start again from scratch. Enjoy!