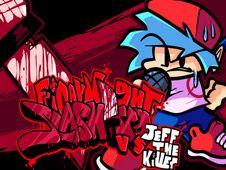 What is FNF: Friday Night Slashing Jeff The Killer?

Jeff the Killer is a copypasta character, meaning an internet legend character that is usually made to be scary and has a horror story about them, and this killer is now the newest antagonist that you and Boyfriend have to face off against in a musical battle, something that you have to do on the following custom songs:

Defeat the horror of Jeff the Killer using music and rhythm!

It's your choice if you face off against this character in the story mode or the free play mode, and in both of them, you have to give your best to reach the end of the songs and turn the progress bar towards you.

To achieve that, press the arrow keys at the same time as the arrow symbols above BF are matching since that is how you follow the charts, but be careful not to miss doing it too many times in a row, or you lose.

We wish you good luck and all the best, and we hope that you play even more games with FNF after this one!