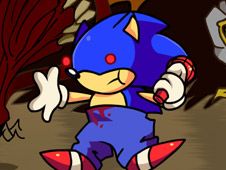 What is FNF VS Sonic.EXE Cereal Killer?

Sunky is a new version of Sonic from the world of FNF, who you will now help go up against various evil versions of himself, such as Sonic.Exe, all in the FNF Cereal Killer mod that features the following songs:

Whether you play the game in the story mode or free play mode, winning is achieved in the same way, by reaching the end of the songs, and to do that you need to hit your notes according to the charts.

Do so by pressing arrow keys simultaneously as the identical arrow symbols match above BF. If you miss hitting them too many times in a row, you lose, so focus not to let that happen. Good luck, enjoy!