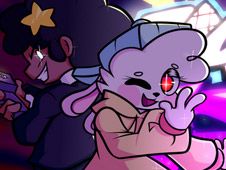 What is FNF: Friday Night Fever?

One of the biggest FNF mods online we've had on our website in quite a while is now being put forward for all of you to play, a game called FNF: Friday Night Fever, where you take on the role of Fever, mayor of Fever Town, with you and your girlfriend both being aliens, and have to face off against all sorts of misfits and rejects living in your town. This is a game with six new original weeks, counting for a total of 20 new songs:

It's Friday night, get your fever on!

Battle against these various antagonists in either the Story Mode or the Free Play Mode, and in each of them you have the same purpose, which is to give your best to play the songs according to their charts, reach their end, and win by turning the progress bar towards you.

When arrow symbols above your character are matching one another, it is at that point you need to tap the same arrow keys, in order to get the notes correctly, but know that if you miss doing that too many times in a row, you lose and have to start again from scratch. Good luck!

Temple of the Monkey Bird
ADVERTISMENT