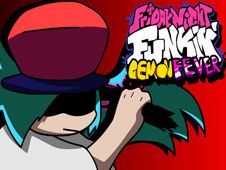 What is Friday Night Funkin’ VS Lemon Fever?

The Lemon Demon of Friday Night Funkin' has powered-up just like a Super Sayan from Dragon Ball Z, an anime to which there will be many references in this game, and you now face off against him in yet another full week mod, the second one, where you have the following list of songs:

In both the story mode and free play mode you need to reach the end of the songs by playing all their notes according to the charts to win, so when you see arrow symbols match above BF's head, press the identical keys at the same time.

Know that missing hitting multiple of the notes in the charts in a row leads to you losing and having to start again from scratch, something we clearly don't want for you, as we want to see you win!