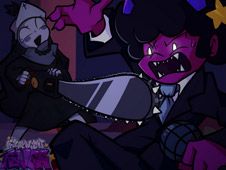 Wow, if you liked the last time you were the mayor of FeverTown and had great rhythm battles, you will love to return right now with a brand new version of the mod, one known as Friday Night Fever + Taki's Revenge, where in addition to the extra week with Taki, you also have another surprise one, totaling lots of awesome songs that you already know, plus the following ones:

Once more, win your seat as mayor of music Fever Town!

After choosing between playing in the story mode or free play mode, the way to win each music battle is by reaching the end of the songs, which can only happen if you've played all its notes according to the chart.

This is done by pressing arrow keys at the same time as the identical arrow symbols above BF match one another, but be careful not to miss doing it too much, or you lose. Good luck, and all the best we wish you all!