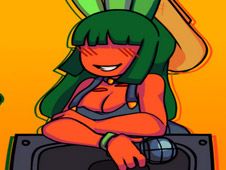 What is FNF VS Katrine Carrot Girl (Friday Night Farmin)?

Katrine is a girl living on a farm who spends most of her time farming carrots, so much so that she even looks like one, with her hair being green, and her skin being orange, and when BF and GF met her during a walk through her farm, she immediately challenged our protagonist, so let's play this mod and give it your best to defeat her!

There are three songs that represent this character in the mod, and you can play them in either the story mode or free play mode:

When you see the arrow symbols above BF being matched with one another, it is at that time that you have to press the same arrow keys, and you have to keep doing so until the end of the song. If you do so and follow the charts accordingly, you will win, but if you miss to pres too many keys in a row, you lose the game and have to start again.

We wish you all good luck and all the best, and hope that this is far from the final new FNF mod online you play here since we have plenty of them planned for you, today and every day!