FNF vs Baldi’s Basics in Funkin 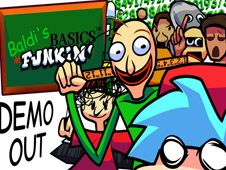 What is FNF vs Baldi’s Basics in Funkin?

Baldi's Basics is quite a popular online game which we are sure that many of you already know, even more so since you can play it on our website, but now you get to face off against this teacher known as Baldi, because he is bald, in a rhythm battle together with Boyfriend from FNF, something that you do on the following custom tracks:

Show Baldi the basics of music and rhythm!

From the game's main menu you will choose between the story mode and free play mode, then you will have to give your best to reach the end of the songs by playing all of its notes according to the charts.

To do that you have to watch for when arrow symbols above BF match one another, and then swoop in and press the same arrow keys from the keyboard.

Of course, missing to press those keys too many times in a row leads to you losing the game, so be quite careful not to let that happen for anything in the world. Good luck, enjoy!