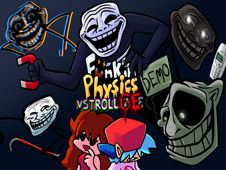 What is FNF Funkin' Physics?

The ultimate FNF mod that mixes up both the Trollface and the Trollge songs and characters is here for you, and FNF Funkin' Physics is a full mod that contains no less than 11 songs, divided into two weeks. Yes, you've read that right, ELEVEN, and the tracklist is as follows:

It's an FNF battle between BF and Trolls, let's help him win it!

In either the story mode or free play mode, winning is achieved in the same way, by reaching the end of the songs, and that is possible only by hitting all your notes according to the charts until that moment. This means pressing arow keys at the same time as the identical arrow symbols match above BF. Don't miss doing it too many times in a row, you need to start again from scratch. Enjoy!