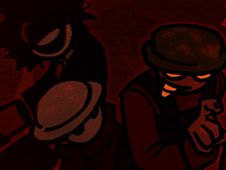 What is FNF Dave and Bambi: 3D Dead Forest?

In the 3D Dead Forest of FNF, you will find the new mod featuring Dave and Bambi, classic and iconic characters from this world already, and the character you become in this new game is called Darrel Alastair O’Neill, and you need to help him defeat his musical foes on the following songs:

Escape the FNF 3D Dead Forest with Dave and Bambi!

After you've made your choice between playing in the story mode or free play mode, know that in both cases you win in the same way, by reaching the end of the songs, something that is done by hitting notes according to the charts until that point.

To do it, press the arrow keys at the same time as the identical arrow symbols match above the character to the right but know that if instead, you miss your notes too many times, you lose and need to start all over again from scratch. Enjoy!